Do you have questions for us? Do you want to discuss an upcoming project? Do you need help managing or updating your current website? We're here to help, just drop us a line. 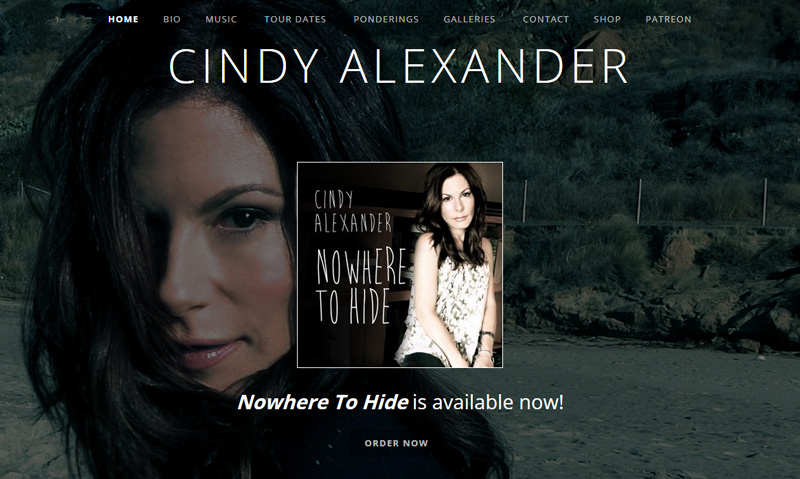 Cindy Alexander’s site is built on the WordPress platform using an “off the shelf” customized WordPress theme. The site integrates the BandsInTown tour date information and her Twitter feed.

Born and raised in Los Angeles, Cindy was trained at the acclaimed USC School of Drama but realized quickly that there was enough “drama” in real life and the best part she could play… was herself. So, she wrote what is now 9 CDs (and added to numerous compilations and soundtracks) worth of her life, which she has performed all across the United States, Japan, Germany, Ireland, and islands as far as Barbados and Guantanamo Bay. As a seasoned writer and performer, she has tackled numerous subjects – not only the classic singer/songwriter confessional fare of dysfunctional relationships, marriage, and motherhood, but also her personal discovery and recovery from breast cancer, the perils of the entertainment business, classic literature, sexuality, spirituality, history and the human condition. There is no topic which is out of bounds – she tells The Truth.

She’s won a multitude of awards including David Foster’s/NBC Star Tomorrow, L.A. Music Awards Songwriter of the Year/ Independent Pop Album of the Year/ Producer’s Honors – Best of Last 25 Years Female Singer-Songwriters, All Access Magazine’s Best Female Pop Vocalist, Just Plain Folks Song of the Year/Female Artist of the Year, L.A. Music Critic’s Best Female CD (3 time winner) and Best Pop/Rock Artist. Even with accolades and a “record deal” as a prize for winning a reality show, she’s stayed independent on her own JamCat Records, which found the perfect partner in Blue Élan Records in 2014.

We’ve worked together for over 15 years. If he wasn’t one of my favorite people on the planet and most talented graphic/web designers, that wouldn’t be the case! #HighlyRecommended